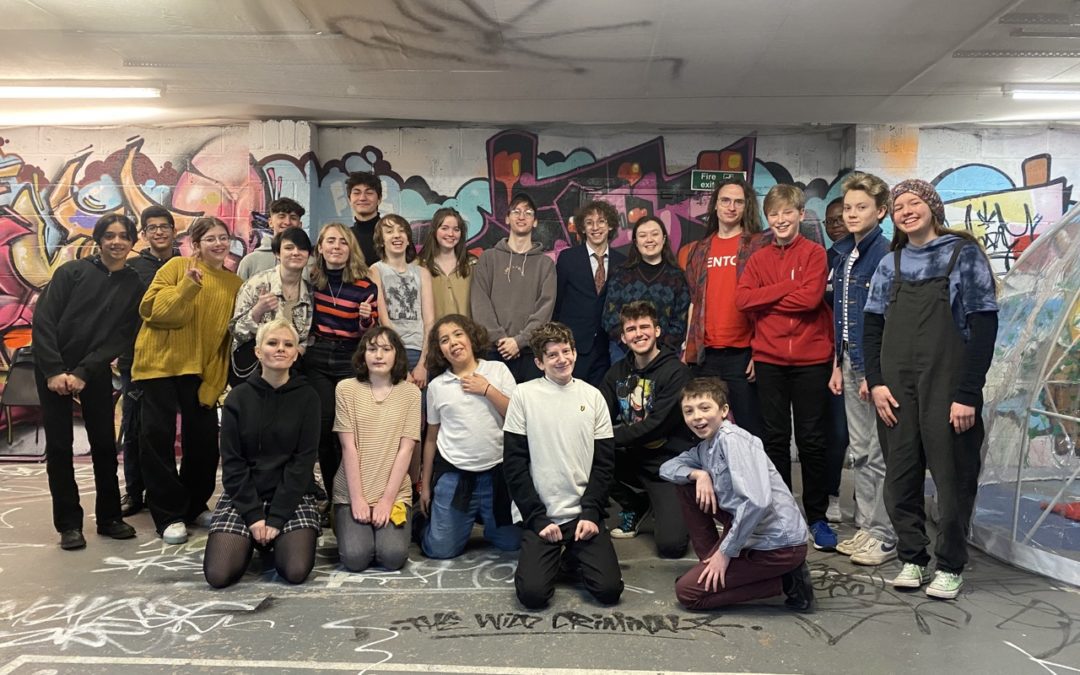 On 13th March, Ex-Member George Hannigan came back to deliver a Comedy 101 Masterclass for our Members! Since leaving Stage2, George went on to train at the Oxford School of Drama and then joined the cast of Mischief Theatre’s ‘A Comedy About a Bank Robbery’ on a National Tour and then in the West End. Following that, he has gone on to film for ITV, Sky Cinema and Netflix.

The workshop saw 20 of our members engaging in fun and comedic games and exercises, gaining lots of hints, tips and insight from George to develop their comedy skills. He even treated us all to a Q&A to gain further knowledge and wisdom learning from his career!

Here’s what our members had to say about it:

‘Fantastically Funny. I learnt a lot about comedy and feel I’m a funnier person because of the work shop. It was great meeting George and seeing the success that old Stage 2 members go onto achieve.’

‘The comedy 101 masterclass was amazing with some truly hilarious and spontaneous moments brought about by the other participants and encouraged by George who facilitated us through some old and new exercises that were such fun. I found the style of comedy really open and wished we had more time to try out a few more exercises and to watch some more of Mischief Theatre. The Q&A was really helpful to get a view of his career, comedy and some helpful ideas for our own comic or acting lives.’

‘This masterclass was an amazing opportunity to work with an ex-member successful in the industry and learn from his experience. It was also great to be able to do something extra with friends and focus on creating something amusing and enjoyable together.’

‘Working with George was truly a dream come true. It was such an interesting experience to learn so many useful tips, tricks and techniques for comedy performances and life as an actor in general from a professional actor and it really opened my eyes to different skills and area of acting that I hadn’t yet realised existed. Seeing how someone who I had in fact been in a play with and looked up to almost 7 years ago had gone so far and gained so much experience in such a short space of time really inspires me in terms of my acting and I hope to have more opportunities with more exciting ex members in the future.’

‘I think this masterclass was an incredible opportunity, not only was it conducted in a manner that was friendly and felt open to everyone – but taught me a lot about the drama industry and comedy as a whole! It’s always so interesting to learn hints and tips about the world of acting you didn’t know before, and what better way to learn about them, than from a successful, established actor himself. It was educational yet still filled with so much fun – a pretty perfect evening.’